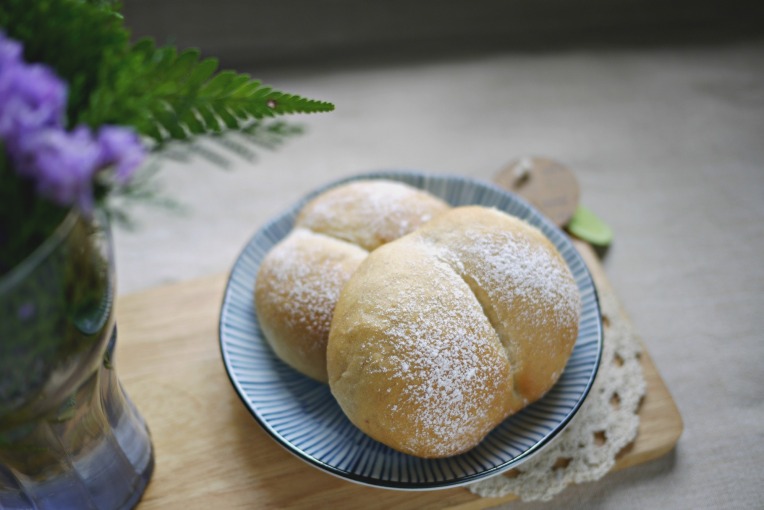 OK, so these buns are still not as white as I thought they should be after tweaking the oven setting to bake at 150C, which is the lowest temperature that my oven can go.  But at least it took a shorter time to heat up compared to these baked yesterday which required a preheated oven at 190C.  That’s some electrical charges saved.

Another great improvement is the shaping part, the bun finally looks like 2 buns fused in the middle with that signature groove of a Haiji bun.  I used my rolling pin to make a deep and much wider dent on each dough ball.  I had to dust the top of the dough with flour to prevent the pin from sticking.  That’s 2 more tips I have picked up.

Start the mixer running on its lowest speed again to knead the dough for 1 minute, before adding cubed butter, one by one.  Knead until the dough reaches window pane stage, this is when the dough becomes very smooth and elastic, and starts to pull away from the sides of the bowl.  Remove the bowl from mixer, cover with tea towel, and bulk rise for 1 hour.

After an hour, the dough should rise to double its volume, punch it down to release the gas, and transfer to a clean work top.  Flatten the dough to push out gas trapped inside the dough.  Divide dough into 9 equal portions, I weigh out each dough at about 55g each.  Shape each portion into a ball and place it on a greased tray, seam side facing downwards. Using a rolling pin, make a straight deep dent in the middle of the bun, without cutting the bun into halves.  Dust flour on the top the dough ball to make it less sticky for the rolling pin to be removed.

Let the buns sit in a draft free place to rise for another 50-60 minutes.   Optional: I topped my bread dough with rice flour before baking for decorative purpose.

Bake the buns in a preheated oven at 150C and bake for 15 minutes.  Remove the bread from the pan immediately after baking, and let it cool on a rack completely serving.

Store in an airtight container if not consumed immediately, to keep the buns soft and the crumbs from drying out.