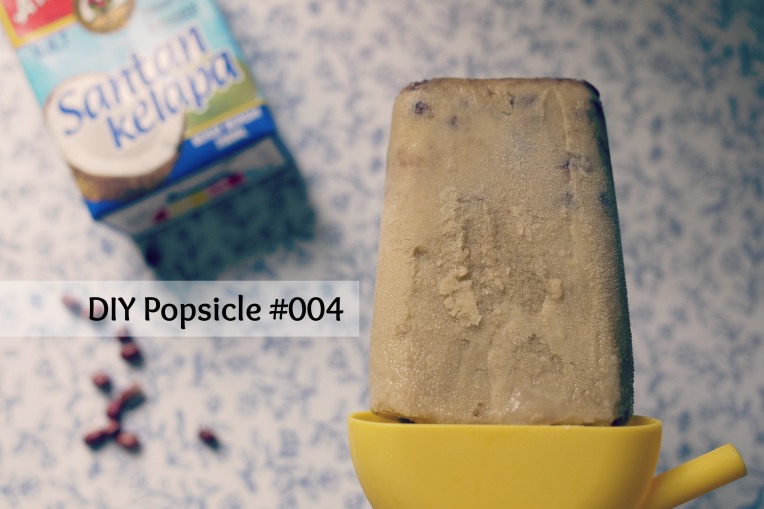 Gosh, it has been drizzling pretty often recently, hasn’t it? But the temperature hasn’t really come down after the rain, neither am I enjoying any cool breeze from my kitchen window. So the DIY popsicle project continues….

Sticking to the preference for creamy popsicle, I turned to ingredients commonly found our local dessert for inspiration : Gula Melaka Sago / Cendol. I removed the sago and cendol bits as I don’t think they taste good frozen, but I kept the red beans (think: potong ice-cream).

You may end up with extra Gula Melaka Syrup, depending on how sweet you want your popsicles. Keep them in clean glass jars, and consumed within a few weeks.

DIY Popsicle Version 004 : Gula Melaka Coconut Milk Popiscle
1. Base : Make Gula Melaka syrup by melting 100g Gula Melaka with a bit of water (50ml) in a small pot over low heat. Add Pandan leaf (1 qty, knotted) and simmer till mixture slightly thickens. Remove pot from heat and let syrup cool down slightly, about 15 minutes. Remove Pandan leaf. Mix 1/8 tsp of salt to 1 cup of coconut milk. Add Gula Melaka syrup to coconut milk slowly till preferred sweetness level.
2. For some bites : Boil and cook 2 tablespoons of red beans till soft. Fill the base of the molds with some red beans first before filling the rest of the molds with Gula Melaka Coconut Milk Mixture.

What I would do when I didn't bring or bring enough reusable food containers for takeaway meals?
My decade-long switch to a more sustainable, low-waste lifestyle has taught me that everything I consume makes an impact, no effort is too small, and magic happens when done collectively. Taking part in the #CarbonCopyChallenge by @temasekshophouse to share my planet-friendly diet with more people!
How to repurpose food jars that would otherwise be thrown away.
Despite my many years of #zerowaste grocery shopping attempts, I admit that I have more failures than successes. For every "naked" vegetable that I buy, I'll bring home another produce that is pre-packaged in plastics, usually from mushrooms and fruits. That's why it's even more important for me to stick to my shopping list and make sure I finish all the food at home. I cannot avoid all plastics but I can definitely prevent food waste. Here's what I bought today, to be consumed in coming week. Shopping with reusable bags helps to limit my purchases. I usually bring two to three bags, anything more, I know I am buying too much!
How I turn 4 types of food waste Into free fertilisers!
I always find it hard to stick to a plant-based diet; I can live without meats, but I love cakes and ice cream too much to give them up. Since I started posting my meals on the @abillion app, I realised that I am more vegan than I thought! In slightly over a month, I have posted more than 100 times on the platform. The best feature of this sharing platform is that the app donates $1 to a charitable cause of my choice for every post. I have chosen to support @sharethemeal , so each post turns into a meal donation for a kid. This will motivate me to keep my #plantbased meals habit as long as I can! Sharing my favourite 10 places/dishes which I have also posted on the @abillion platform, join me there! 😊
Here's how I shop #zerowaste at the wet market:
Besides sharing my meatfree meal ideas here, I also share my recipes on @helloyoripe platform. I have been invited to come up with a low GI, low fat recipe for a #7DayDetox meal plan. Using thai brown rice from @royalumbrellasg , I prepared a healthy Ochazuke recipe using plant-based ingredients such as mushrooms, leeks (CNY leftovers!) and natto.
Homemade my almost #zerowaste vegan kimchi. Packaging-free ingredients include napa cabbage, carrot, onion, ginger, and spring onions. When done, I stored the kimchi in my favourite upcycled glass pasta sauce bottle.
Loading Comments...
Comment
×
%d bloggers like this: