Raisins in bread are always welcome.  The addition of potato made the loaf really soft, as I was slicing it, every piece bended and collapsed beautifully on the one before.

This loaf got wiped out in one day.  Time to get on with ideas for the next potato bread.  I think I just saw purple sweet potatoes at the kitchen counter. 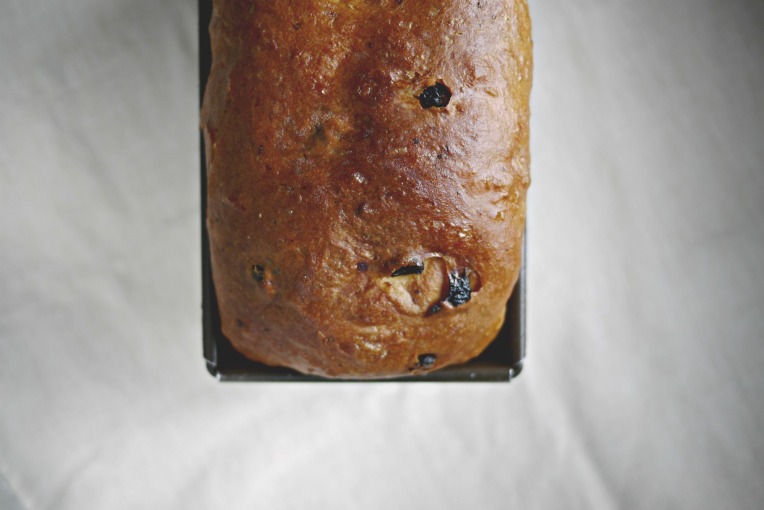 ** I used a large egg that weighs 70grams with shell.

*** Potato water refers to the water that the potatoes were cooked in.  Cool it down to room temperature before using.

In a bowl, add the raisins and pour just enough warm water to cover the raisins.  This helps to hydrate them and prevent the raisins from drawing moisture from the bread when they are mixed into the dough.

In a mixer bowl, combine plain flour, instant yeast, raw sugar, sea salt with a hand whisk to form a uniform mixture of dry ingredients.  Add mashed potato, egg, and water next.  Turn on the mixer with a dough hook attachment and knead these ingredients on the lowest speed (KA 1) till they come into a ball.  Continue to knead for 3 minutes, then stop the mixer and let the dough sit for 15 minutes.

Turn on the mixer again and knead for 1 minute before adding butter cubes one by one while the mixer is running on its lowest speed.  Keep kneading till there are no traces of butter left and the dough has reached window pane stage.  At this stage, the dough will be extremely pliable and baby-bottom soft.  Stop the mixer for a while.

With one hand, squeeze to dry the raisins that have been soaked in warm water.  Add them to the dough in the mixer bowl, and start the mixer again on its lowest speed to incorporate the raisins into the dough.  Frankly, the electric mixer won’t do a very good job at mixing the raisins uniformly into the dough without over-kneading it.  I usually stop the mixer after 1-2 minute and take over to knead by hand, trying my best to spread the raisins  and make sure that they don’t clump at one spot.  This is to ensure that there will be raisins on every slice of the bread.

Leave the dough in the mixer bowl for its first proof of 60 minutes.  The dough will rise to double its volume,  punch down to deflate and transfer it to a clean worktop.

Flatten the dough with rolling-pin to push out any gas trapped inside the dough during proofing.  Shape the dough and place in a bread tin.  Proof for 50-60 minutes.

Bake in a preheated oven at 170C for 30 minutes.  Remove bread from bread tin immediately after baking and let it cool completely on a rack before slicing.

To soften the top crust, brush melted butter over the top of the loaf while it is hot.  I keep a handy small block of butter just for this purpose and run it over the crust and let the heat from the bread melt the butter as they come in contact.  Save the hassle of melting butter and washing an oily brush.

If the household refuse fee is calculated based on the volume of trash generated, would we start to think twice before discarding stuff, or even better, we may begin to:
The dumpling season is here! I am so thankful for these homemade vegetarian ones made by my mother-in-law. She filled them with my favourite shiitake and monkeyhead mushrooms, ginko and cashew nuts.😋 These dumplings are #meatfree and #plasticfree as she even avoided using plastic raffia strings to tie my vegetarian version!
I only cooked the rice and sliced a tomato for this lunch meal. The curry dishes were leftovers from a weekend gathering. I hate wasting food and I rather buy/order less and not deal with excess food to begin with. But when I open my fridge, I see plenty of containers filled with leftover food and half-used/prepped ingredients. As a regular homecook, I can never clean out my fridge, no matter how hard I try. Swipe to see my well-stocked fridge despite no grocery runs over the long weekend.
New habit: packing homecooked lunch to work. Save money. Avoid crowd.
Recently, there have been many articles on how to cut food expenses given the rising price trend. My best tips are:
15 years of eating meatfree and counting, cos it's getting easier! I cook with mostly fresh, unprocessed ingredients and this is the cheapest way to go vegetarian.
I harvest sweet basil from my corridor garden very often. My plants fully understand my consumption pattern and have been syncing their supply to my demand! A plant seller once told me that the more we prune the herbs, the more leaves they will produce. Great tip!
I am so comfortable with cooking stovetop rice that I prepare Nasi Lemak the same way too. Sharing my small batch recipe that uses two cups of uncooked rice. I hate leftovers, especially rice, so I make sure to cook only the amount of rice that we can finish.
盆菜 Poon Choi is an easy CNY dish to make at home. Traditionally prepared with premium ingredients to symbolise a bountiful year ahead, I made mine vegetarian with ingredients that I wish to eat -> 心想事成/ wishes fulfilled, equally auspicious, right? 😅
Loading Comments...