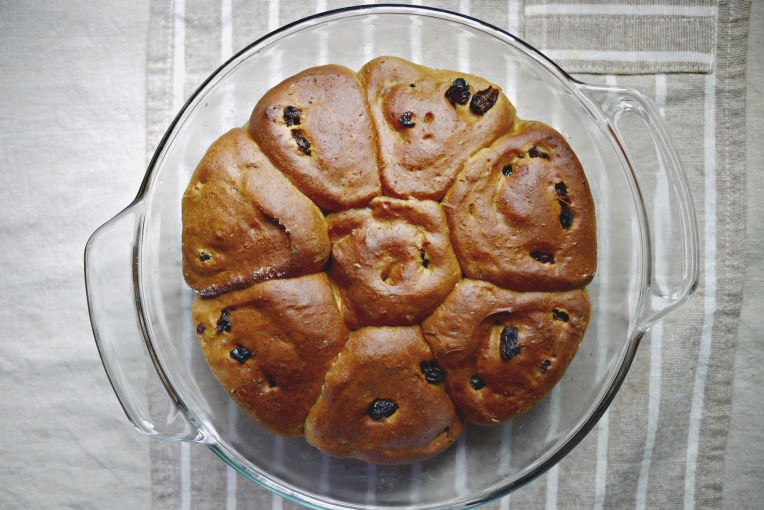 These are basically cinnamon buns with the sugary fillings and glaze removed.  I thought it was a good idea to add mashed carrots into the dough since they go so well with cinnamon and raisins in my carrot cakes. 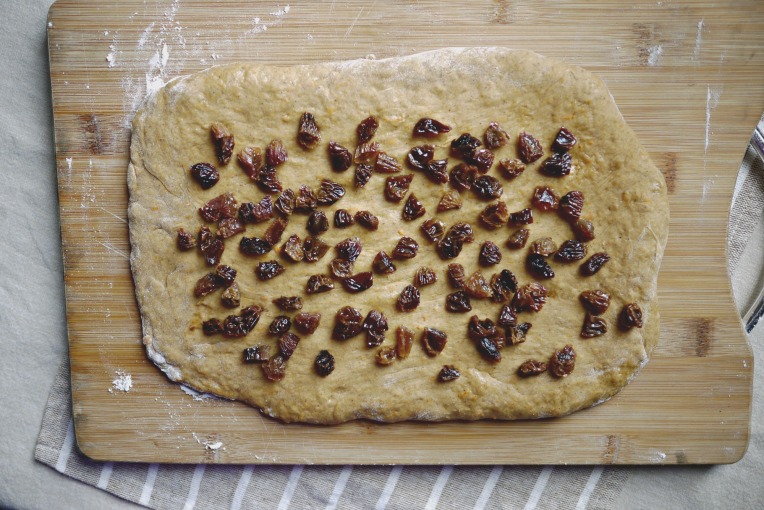 Because I did not spread butter and sugar on the surface of the dough, there were no pretty swirls on my cinnamon buns. If you prefer to see that on your rolls, brush a generous layer of melted butter, followed by another layer of cinnamon grounds, brown sugar and raisins before rolling the dough up.  The layer of fat will keep the dough from sealing up during slicing and proofing.

I baked these buns in my 9-inch/ 23cm clear glass pot instead of my round tin as I wanted to utilize the pot more.  It also serves as a great storage container for the buns since it comes with a heavy glass lid. 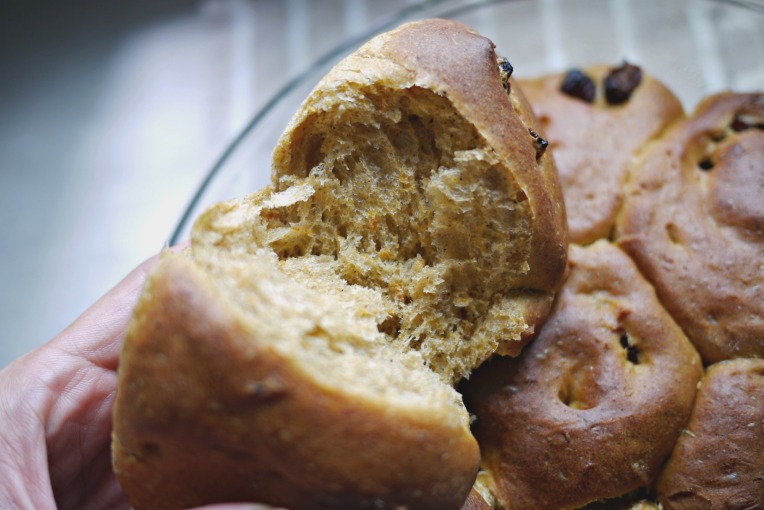 I feel great seeing carrots in my breakfast rolls!

** Soak raisins in a bowl of warm water for 30 minutes.  Drain and gently squeeze dry to remove excess liquid before use.

In a mixer bowl, combine all the dry ingredients together (plain flour, yeast, sea salt, brown sugar, cinnamon grounds) with a hand whisk.  Then add beaten egg, cooled mashed carrots and water.  Turn on the mixer to knead with a dough hook.  Once a dough ball is formed, stop the mixer and let the dough rest for 15 minutes.

Start the mixer again to knead for 1 minute before adding cubed butter one by one, and knead till the dough reach window pane stage.  Stop mixer and leave the dough to bulk rise at room temperature for 60 minutes.

After the dough has risen, punch down the dough to deflate and transfer to a clean and lightly floured work top.  Sprinkle worktop and palms with flour if the dough is too sticky to handle.

Roll out the dough to a rectangle sheet, spread raisins on the surface.  Roll up the dough from the longer edge and pinch to seal.  Slice the roll into 8 pieces and arrange them in a 9-inch pan.  Leave this aside to proof for another 60 minutes, covered.

When done, remove bread from baking tin immediately and place on a rack to cool completely.

The coffee powder stall owner always reminds me that plastic containers are not suitable for storing coffee grounds. Today, he commented that the one I am reusing to buy coffee grounds is one of the worst kind. "Put any coffee powder in this and all coffee aroma would be gone in one day!" I reassured him that I am transferring them to a nice glass jar, airtight one, no less.
Today's meatfree breakfast. Prepared using bread from a nearby old school bakery and locally produced vegetarian luncheon meat.
When I shop for fresh produce at the wet markets, the sellers will recommend vegetables from our local farms first. I think it's great to prioritise the local producers, which will help to reduce our carbon emissions from imported food, right? The current choices of local produce are somewhat still quite limited, but every bit of effort to adding more local ingredients onto our dining tables helps. Even supporting local food factories too!
What I get from my corridor garden:
What I put in my compost bins:
A last minute Mala hotpot dapao decision yielded a plastic container. Sigh. #zerowastefail
Yesterday, before selling me the broccolini, uncle wanted to make sure that I consume them by end of the day, "Weather so hot! Many imported vegetables are not keeping well. I don't want you to buy if you are not eating them today." I told him, yes, I am here to get ingredients for the next two days. "But I will steam the broccolini today and store in the fridge, in case I change my dinner plan." Uncle was so happy with my suggestion "哇，你头脑跟好！煮先明天才吃，可以可以，我卖你便宜"!" Loose translation: Wow! You got good brains 😅, cook today- eat tomorrow idea works! I sell you the broccolini cheaply!"
Feel heaty and under the weather? I'll pick up a bottle of 24 flavours herbal tea 二十四味 if I pass by a Chinese medicinal hall. Otherwise, I'll rely on my homebrewed monk fruit tea 罗汉果。 The 24 flavours tea at this hawker stall located in Old Airport Road Food Centre is super bitter, which means it's super cooling and effective to combat heatiness!☀️☀️☀️
The market stallholders are always very impressed by the seemingly endless number of reusables I bring along for grocery shopping. What they don't know is that I have already roughly planned a shopping list in my head before heading out, so I will bring the right type and quantity of containers. Sticking to a short grocery list helps to ease the reusable container load too. Otherwise, I'll look like Santa Claus carrying a big sack of presents, even before stepping inside the market. 😅
Loading Comments...